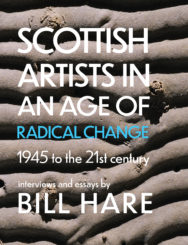 Scottish Artists in an Age of Radical Change: 1945 to the 21st Century

The visual arts throughout the post-war era have made an invaluable contribution to the cultural development of modern and contemporary Scotland.

Through a compilation of in-depth interviews with the artists themselves and accompanying critical essays, Bill Hare here examines the richly diverse work of these important figures in modern and contemporary visual culture, revealing the intellectual power and artistic imagination of those who have created one of the greatest eras in the history of Scottish art.