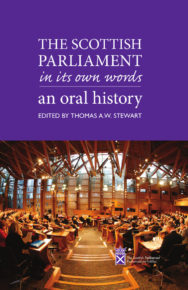 Home > History > Scottish Parliament in its Own Words: An Oral History

Scottish Parliament in its Own Words: An Oral History

Through its comparatively short life, the Parliament has been tested. What was once an upstart institution, unsure of its place in the world, has now become an ingrained part of the nation’s political landscape. Now is an ideal moment to take stock of the Parliament’s 20-year history – to investigate its origins, its early days and how it has developed over the past two decades.

Thomas Stewart began working at the Scottish Parliament in December 2017, midway through a Scottish History PhD at the University of Edinburgh, studying the political history of Dundee between the 1970s and the present day. He was originally hired as an intern on a programme supported by the Arts & Humanities Research Council through the Scottish Graduate School for Arts & Humanities, which enables organizations to access the talent of researchers to deliver a specific piece of work or project. As an intern he had a number of responsibilities, one of which included looking into establishing an oral history project that could be included as part of the Parliament’s official archives at National Records of Scotland. Over the course of his internship, lasting between December 2017 and June 2018, he helped establish the Scottish Parliament Oral History Project and conducted 75 interviews with members of Parliament staff, MSPs and journalists, assembling a sizable collection. In September 2018, he was rehired to write this book as a member of Parliament staff, and was given almost complete autonomy to bring it together.