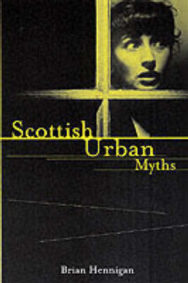 The couple in Falkirk whose pet dog is crushed in a freak accident; The Glasgow girl who visits an elderly aunt in an institution and doesn’t find it so easy to leave; The Aberdeen baby-sitter and the murderous, mystery caller; We all know a tale or two of scary or amusing events said to have happened to someone they know – a friend of a friend, your sister’s boyfriend’s mum, this bloke I was at school with – and the events happened just down the road, or out in the wilds of Scotland, but somewhere you’ve been or at least might someday visit. These are urban myths, and as this book reveals, Scotland has more than it’s fair share. Written in Brian Hennigan’s own inimitable style, these powerful stories have a universal appeal – tales that seem somehow familiar, somehow true, that make you chuckle or your hair stand on end, that you want to pass on, that you can’t quite forget…even if you want to.

Brian Hennigan: Born and educated in Scotland, Brian is well known as a stand-up comedian and a writer of journalism and fiction. His debut novel, Patrick Robertson was published to critical acclaim in 2000. Brian is also a renowned bon viveur, and a man of many and various passions – including long-distance running.