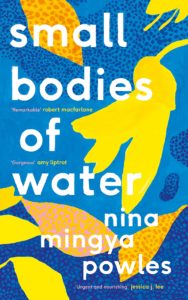 Home is many people and places and languages, some separated by oceans.

Nina Mingya Powles first learned to swim in Borneo – where her mother was born and her grandfather studied freshwater fish. There, the local swimming pool became her first body of water. Through her life there have been others that have meant different things, but have still been, in their own way, home: from the wild coastline of New Zealand to a pond in northwest London.

This lyrical collection of interconnected essays explores the bodies of water that separate and connect us, as well as everything from migration, food, family, earthquakes and the ancient lunisolar calendar to butterflies. In powerful prose, Small Bodies of Water weaves together personal memories, dreams and nature writing. It reflects on a girlhood spent growing up between two cultures, and explores what it means to belong.

Nina Mingya Powles is a writer, editor and publisher from Aotearoa New Zealand. She is the author of three poetry collections, including Magnolia, which was shortlisted for both the Ondaatje Prize and the Forward Prize; and Tiny Moons: A Year of Eating in Shanghai. In 2019 she won the Nan Shepherd Prize for Small Bodies of Water, and in 2018 she won the Women Poets’ Prize. She is the founding editor of Bitter Melon. Nina was born in Aotearoa, partly grew up in China, and now lives in London.