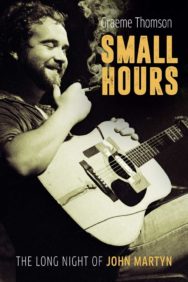 Did any musician in the Seventies fly so free as John Martyn did on Bless The Weather, Solid Air, Inside Out and One World? Did any fall so far?

Small Hours is an intimate, unflinching biography of one of the great maverick artists. Though Martyn never had a hit single, his extraordinary voice, innovative guitar playing and profoundly soulful songs secured his status as a much admired pioneer.

Covered by Eric Clapton, revered by Lee Scratch Perry, produced by Phil Collins, Martyn influenced several generations of musicians, but beneath the songs lay a complicated and volatile personality. He lived his life the same way he made music: improvising as he went; scattering brilliance, beauty, rage and destruction in his wake.

Graeme Thomson is the author of several books. UNDER THE IVY: THE LIFE & MUSIC OF KATE BUSH (Omnibus, 2010) was described by The Irish Times as “the best music biography in perhaps the past decade” and by MOJO as “superb”. Record Collector called I SHOT A MAN IN RENO (Bloomsbury, 2008) “one of the most informative and fulfilling music books you’re ever likely to read.” Graeme Thomson has written for the Observer, New Statesman, Oxford American, the Telegraph, Time Out, MOJO and Rolling Stone, and contributes regularly to the Guardian, Uncut, the Herald and The Arts Desk. He lives with his family in Edinburgh.