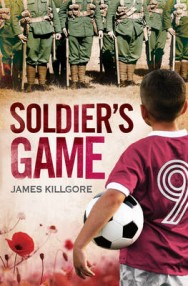 Ross is fed up with being on the losing side, as Bruntsfield Primary football team suffer another humiliating defeat. But after football practice each week he goes to visit his grandmother, and this week she has a special present for him. Pat digs out a pair of old football boots and strip which belonged to her father, who once played for Heart of Midlothian Football Club. Ross is amazed that his great-grandfather, Jack, had played for the famous Hearts. As he finds out more about Jack, an incredible story unfolds — a tale of Edinburgh’s young heroes and a battalion of footballers and fans who fought in the First World War at the Battle of the Somme. Based on the true story of the 16th Royal Scots, otherwise known as the ‘Heart of Midlothian Battalion’, this moving book brings a fascinating moment of Scottish history to life. Jim Killgore interweaves the present day life of an ordinary football-mad boy with a story of young men who were sent to war. He focuses on the friendships that develop as the lads play football and learn to become soldiers together, making this remarkable story enjoyable and accessible for young people.

'This simply told story brings to life a small slice of Great War history and puts football into perspective.' — Jane Sandall, The Scotsman 'This is a very well paced and plotted book, and the different strands are nicely entwined and equally nicley resolved at the end. What starts as an account of a schoolboy's enthusiasm for football builds into much larger themes.' — Undiscovered Scotland –A Soccer Star Goes to War– 'This is a fantastic book that combines sports and war history. The reader is taken into the life of the soldier so they can really understand what it was like to be a soldier during world war one without feeling like you're stuck in a history book and the football sequences were fantastic. There is a nice set of facts at the back so readers can get information about the war. It is a short and quick read. Appropriateness: This is the perfect book for intermediate and middle school boys. It is short (around 160 pages) and is full of sports and battle scenes that will encourage reluctant readers. The war sequences are brutal but not graphic. Ross is around 12 and while his great grandfather Jack is an adult, the story is told in a way that will engage younger readers (a soccer star goes to war). I would encourage teachers and librarians to get a copy to put on your shelf. ' — booksyourkidswilllove.blogspot.com 'Books that boys will read are few and far between but this is a book which is well worth reading, whether you're male or female, boy or girl.' — Lothian Life 'The First World War has been a fertile source for children's literature and this book is a successful example, which would make a worthy addition to a school fiction collection supporting the study of the period … The interweaving of the stories of two football-mad boys presents a moving and thoroughly researched account of one aspect of the War. I was surprised to find that Killgore is an American and not a native-born Scot. The sense of place in his portrayal of Edinburgh now and then is very strong; and the detailed descriptions of football matches are sufficient to satisfy true fans … The twin themes of football and war make this a book to appeal to boys. There is a lack of any real female interest (although the grandmother is a strong character), but the narrative is well-written enough to draw any reader in, and many girls play football, too.' — The School Librarian 'Soldiers Game is a great little book which cleverly combines football and World War One, and in particular the story of the famous (in Edinburgh at least) 'Hearts Battalion' which fought at the Battle of the Somme. Killgore cleverly brings together the present day life of Primary 7 pupil Ross with the story of his Great Grandfather, Jack who not only played for Hearts but who also served his country. 'The descriptions of both the football and the battlefield in the book are excellent … He also touches on a number of interesting points in the story but it is never in a heavy 'text book' style and this is one of the many reasons why this book will appeal to young people. No matter what team you support you will be sure to enjoy this book. It's engaging, moves along at good pace, and tells a thoroughly interesting story. It's a must read for any football fan — however be warned there are no mega-rich Prima Donna's in this novel.' — Literature for Lads 'This was an enjoyable read because it was a true story and it focused on football, and even better on the team that I support. As war was the other theme of the book this made it even more interesting to me. I would personally recommend it as a really good read. –Teen Titles

James Killgore was born in New Orleans in 1959. He studied both in the USA and England, where he met his wife Ann who is from Ayrshire. Jim worked in New York as an editor on a children’s science magazine before moving to Edinburgh in 1987. He is now a magazine editor in Glasgow, and has two children. Jim has written two previous novels for young people: Buck Falaya and The Passage.