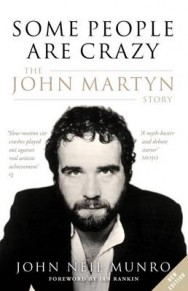 Some People are Crazy: The John Martyn Story

Described recently by “Empire” magazine as ‘Britain’s best ever blues singer’, John Martyn was one of rock music’s last real mavericks. Despite long-term addiction to alcohol and drugs, which contributed to his death in January 2009, he produced a string of matchless albums. Loved by fans and critics, loathed by ex-managers, he survived the music business he despised for forty years. With contributions by Martyn, many of his lovers and over twenty musicians who knew him well, this book documents his upbringing in Glasgow and rise through the Scottish and London folk scene of the 1960s, his many highs and lows, and his friendships with the great lost souls of British rock music – Nick Drake and Paul Kossoff.

Reviews of Some People are Crazy: The John Martyn Story

'Diligently researched … a myth-buster and debate starter. ***' Mojo 'Wacky tales of misadventure. ***' Q 'Worth checking out' The Independent

John Neil Munro lives in Laxdale, Isle of Lewis. He studied Modern and Economic history at Glasgow University then completed a postgraduate journalism course in Cardiff. His previous publications include The Sensational Alex Harvey (Firefly Publishing, 2002). He has a great affection for unfashionable 1970s rock music.