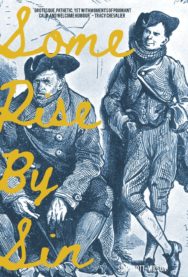 Home > Fiction from Scotland > Crime and Mystery > Some Rise By Sin

Some Rise By Sin

1829 is a tough year to be a body snatcher. Burke and Hare have just been convicted of killing people to sell their bodies, to widespread outrage—but despite the bad press, doctors still need fresh corpses for medical research.

Sammy and Facey are a couple of so-called ‘resurrection men’, making a living among society’s fringe-dwellers by hoisting the newly departed from the churchyards of London whilst masquerading as late-night bakers. Operating on tip-offs and rumours in the capital’s drinking dens and fighting pits, the pair find themselves in receipt of some valuable intelligence: an unusual cadaver has popped up on the market, that of a hermaphrodite.

For any medic worth his salt it’s a once-in-a-lifetime opportunity—a medical curiosity and rara avis—and famous anatomist Joshua Brookes commissions the two men to obtain the body, at any cost. But some corpses hold secrets, and before long the enterprise becomes a deadlier and more complex undertaking than either man could ever have imagined.

Some Rise by Sin is a rich, authentic and absorbing historical narrative with a darker edge, a story of surviving on the outskirts of respectability. With echoes of Michel Faber’s The Crimson Petal and the White, it is meticulously researched and suffused with the dark and grimy atmosphere of Regency London, and explores what ambition can mean for poor people in a society that conspires to grind them down at every turn.

Siôn Scott-Wilson writes short stories, novels, and plays. His first novel, The Sleepwalker’s Introduction to Flight, was published in 2008 and was listed for the CrimeFest Last Laugh Award. He won the Yeovil Literary Prize for Best Novel in 2013 and was a runner-up for the Fish Publishing Prize in 2008. Siôn holds an MSc (Distinction) in Creative Writing from the University of Edinburgh.

Siôn is a keen épéeist, skier, tennis player, and cyclist. He has appeared nude on the London stage, and he has a BAFTA nomination.