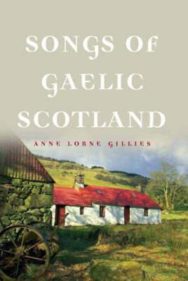 Gaelic Scotland is one of the world’s great treasure-houses of song. In this anthology, Anne Lorne Gillies has gathered together music and lyrics from all over the Gaelic-speaking Highlands and Islands – an extraordinary tradition that stretches in an unbroken line from the bardic effusions of ancient times to the Celtic fusions of today’s vibrant young Gaelic musicians and poets. They paint vivid pictures of life among ordinary Gaelic-speaking people, their hopes, fears and preoccupations, births, deaths and marriages, and personal reactions to the great changes that blew their lives about. Everything about this book is designed to make the songs accessible to musicians and general readers alike. Anne Lorne Gillies provides a unique and informative introduction to Gaelic tradition, simple yet highly sensitive musical transcriptions, and English translations.She portrays the social and historical background of the songs, offers her own commentary on technical aspects of the music and its performance, and adds carefully researched biographical notes and a full discography in order to bring to life not only the people who composed the songs but also some of the singers and musicians who have continued the tradition into the twenty-first century. “Songs of Gaelic Scotland” was winner of the 2006 Ruth Michaelis-Jena Ratcliff Prize in Folklore and Folklife.

Reviews of Songs of Gaelic Scotland

'a panoramic view of the world of Gaelic song … a superb achievement' – John MacInnes 'This book is unique in that it crosses the boundaries between music and literature. Nothing quite like it has ever been done for Gaelic. It is a truly wonderful achievement.' – Scots Magazine 'a remarkable book … both scholarly and entertaining. She walks a fine tightrope between encouraging innovation and respecting tradition, never once falling off.' – Am Bratach 'beautiful and full of substance … I believe that this book will be like a beacon that will last forever and be of untold value to generations still to come.' – West Highland Free Press

Dr Anne Lorne Gillies is one of the best known figures in Scottish life today. She has sung in concerts, theatres, festivals and recording studios throughout the world, and on many TV and radio series which were broadcast throughout the UK during the 1970s and 1980s, until her time was increasingly devoted to the establishment of Gaelic-medium education – as patron of the Gaelic Playgroup Association, national education officer for Comann na Gaidhlig and Gaelic lecturer at the University of Strathclyde. She now devotes a great deal of time to writing and producing multi-media Gaelic resources. For many years she was Gaelic-singing tutor at the University of Stirling Heritage of Scotland Summer Schools, passing on hundreds of songs to her students, several of whom have gone on to have distinguished singing careers of their own.