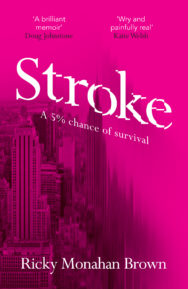 Home > Biography and Autobiography > Stroke – A 5% Chance of Survival

Stroke – A 5% Chance of Survival

The day after losing his job in the aftermath of the 2008 financial crisis, Ricky suffers a catastrophic haemorrhagic stroke. Fortunately, his girlfriend Beth is nearby. A few minutes later, the unconscious Ricky is wheeled into Brooklyn’s Methodist Hospital with a 5% chance of survival, and worse odds of any type of good outcome. Beth begins an eight-week vigil, grabbing an occasional nap on a waiting room floor. Then Hurricane Sandy does to New York what the haemorrhage did to Ricky’s brain. Amid the rubble of a battered city, brain injury, and lost jobs, Beth and Ricky start planning for a future together. After all, this is a love story.

Reviews of Stroke – A 5% Chance of Survival

‘Written with searing honesty and literary panache, this is a great book about a difficult subject.’ – Doug Johnstone

‘No memoir about a major neurological injury should be this funny.’ – Kaite Welsh

‘A wryly humorous meditation on love, the strangeness of life and the miracle of second chances.’ – Allyson Stack

Ricky Monahan Brown suffered a massive haemorrhagic stroke in 2012. Doctors gave him a one-in-twenty chance of a good outcome, where a “good outcome” would be surviving in a non-vegetative, non-plegic state. During recovery, Ricky realised he had stories to tell. His writing has subsequently been published in books, magazines, journals and newspapers. Ricky received a Stroke Association Life After Stroke Award for Creative Arts in 2016, and his night of live literature and music – Interrobang!? – won the 2017 Saboteur Award for Best Spoken Word Night in Britain. He lives in Edinburgh with his wife and their son.