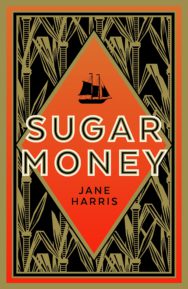 Martinique, 1765, and brothers Emile and Lucien are charged by their French master, Father Cleophas, with a mission. They must return to Grenada, the island they once called home, and smuggle back the 42 slaves claimed by English invaders at the hospital plantation in Fort Royal. While Lucien, barely in his teens, sees the trip as a great adventure, the older and worldlier Emile has no illusions about the dangers they will face. But with no choice other than to obey Cleophas – and sensing the possibility, however remote, of finding his first love Celeste – he sets out with his brother on this ‘reckless venture’.

With great characters, a superb narrative set up, and language that is witty and thrillingly alive, Sugar Money is a novel to treasure.

‘Pitches you headfirst into this outstanding, heartbreaking story of siblings, slavery and the savagery of the colonial past.’ SUNDAY EXPRESS

‘Harris builds a lush sense of place, and the pace and tension of a rip-roaring adventure here, with derring-do and double-crossing.’ THE TIMES

‘Through masterful detail, Harris shows the dehumanisation of the brothers and their fellow slaves  . . . Beautifully cadenced.’ IRISH TIMES

Jane Harris was born in Belfast and brought up in Glasgow. Her debut novel, The Observations, was shortlisted for the 2007 Orange Broadband Prize for Fiction, and she was also shortlisted for the British Book Awards Waterstone’s Newcomer of the Year and the South Bank Show/Times Breakthrough Award. It was followed in 2011 by the highly acclaimed Gillespie & I, and that same year The Observations was chosen by Richard and Judy as one of their 100 Books of the Decade.