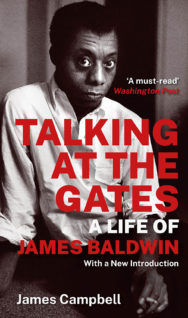 Home > Biography and Autobiography > Talking at the Gates

Talking at the Gates

James Baldwin was born into the squalor of a Harlem tenement and transcended an early life of setbacks and racism. A storefront preacher at the age of fourteen, he supported his entire family – mother and eight siblings – before he began writing for prestigious journals such as The Partisan Review. Troubled by his fame, his sexuality and his colour, he was a great drinker and socialiser with wild periods of gregariousness and monastic retreats during which he wrote feverishly. By the time he died in 1987, his books such as The Fire Next Time, Go Tell It on the Mountain and Nobody Knows My Name had become modern classics.

James Campbell knew Baldwin for ten years. For this book, he interviewed many of Baldwin’s friends and examined several hundred pages of correspondence. He quotes from the vast, disturbing file that the FBI compiled on Baldwin and discusses the writer’s turbulent relationships with Norman Mailer, Richard Wright and Marlon Brando, as well as his friendship with Martin Luther King.

Elegantly written, candid and original, Talking at the Gates is a comprehensive account of the life and work of a writer who believed that ‘the unexamined life is not worth living’.

James Campbell was born in Glasgow in 1951. Between 1978 and 1982 he was editor of The New Edinburgh Review. He is the author of Invisible Country: A Journey Through Scotland and Gate Fever: Voices from a Prison. He lives in London and works for the Times Literary Supplement. His memoir, Just Go Down to the Road: A Memoir of Trouble and Travel, will be published by Polygon in July 2021.