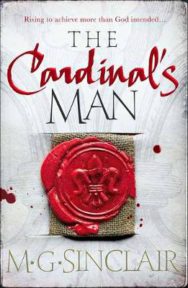 A spellbinding tale set in Cardinal Richelieu’s FranceIt’s over a century before the Revolution and France is under siege. The Thirty Years’ War has spread across Europe, alliances are stretched to breaking point and enemies advance on every side. And while Louis XIII sits on the throne, the real power lies with the notorious Cardinal Richelieu.Now, with Richelieu’s health failing and France in grave danger, salvation may yet be found in the most unlikely form. Sebastian Morra, born into poverty and with terrible deformities, is a dwarf on a mission. Through a mixture of brains and luck, he has travelled far from his village to become a jester at the royal court. And with a talent for making enemies, he is soon drawn into the twilight world of Cardinal Richelieu, where he discovers he might just be the only man with the talents to saveFrance from her deadliest foes.The Cardinal’s Man is a spellbinding tale of France in the time of Richelieu and provides us with a very different kind of hero, a dwarf with the wit of Tyrion Lannister and three foot four inches of brazen pluck.

The only child of two writers, M.G. Sinclair grew up in a world that revolved around literature. Breaking the family tradition, he rebelled and joined the corporate world, where he enjoyed stints as a copywriter at M&C Saatchi, then in marketing at American Express and Westminster Council. However, unable to escape the inevitable, he has now completed his debut, a historical novel inspired by a trip to the Prado in Madrid.