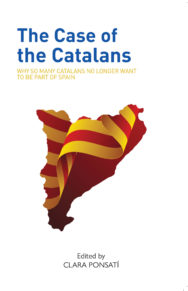 Home > Politics, Current Affairs and Ideas > The Case of the Catalans: Why So Many Catalans No Longer Want to be Part of Spain

The Case of the Catalans: Why So Many Catalans No Longer Want to be Part of Spain

Imagine if your country voted to become independent and that vote was then ignored. This was what the people of Catalonia faced in 2017 when Catalonian pro-independence leaders organised a referendum vote that was declared illegal by Spain’s constitutional court.

Following that declaration of the illegitimatcy of the referendum, Clara Ponsatí, Education Minister, along with Catalan Prime Minister Carles Puigdemont were charged with sedition. They had to leave Catalonia and go into self-imposed exile, and seven of their former cabinet colleagues were imprisoned. The Case of the Catalans is a landmark book that explains the injustice Catalans have faced by being marginalised with their political beliefs rendered unlawful by the Spanish government.In this book, Ponsatí and her team of influential academics discuss the future of the Catalan people and the political and social tensions that led to the famous ‘illegal’ referendum. In a clear and accessible style, they aim to educate as many people as possible, whether interested in politics or not, about the extraordinarily backward democratic process that currently defines Spain’s national identity and has defied the settled will of the Catalan people.

Clara Ponsatí is a Professor of Economics at the School of Economics and Finance at the University of St Andrews. She served as Minister of Education in the Catalan Government. She has a PhD in Economics from the University of Minnesota and specialises in game theory and political economy, with a focus on models of bargaining and voting. Since mid-2016, she has been a member of the national secretariat of the Catalan National Assembly. She is also a member of the Institut d’Anàlisi Econòmicain the UAB.