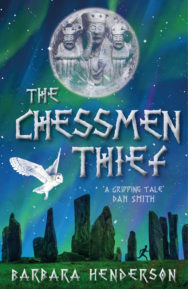 From the moment 12-year-old Kylan hatches a plan to escape from his Norse captors, and return to Scotland to find his mother, his life becomes a dangerous game.

The precious Lewis Chessmen―which he helped carve―hold the key to his freedom, but he will need all his courage and wit to triumph against Sven Asleifsson, the cruellest Viking in the realm.

One false move could cost him his life.

Inverness-based Barbara Henderson is the author of historical novels Fir for Luck and Punch. Her energetic school visits are increasingly taking her across the length and breadth of Scotland, and sometimes beyond. As a Drama teacher, she loves to get young people on their feet as they respond to stories.

Over the years, writing has always been what she loves most: Barbara has won several national and international short story competitions and was one of three writers short-listed for the Kelpies Prize 2013 with a previous novel manuscript.