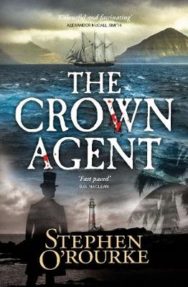 A ship adrift, all hands dead. A lighthouse keeper murdered in the night. The Crown needs man to find the truth. Doctor Mungo Lyon, his reputation tarnished by the Burke & Hare scandal, and forbidden to practise as a surgeon, is the wrong man.That’s exactly why the Crown chose him.

Reviews of The Crown Agent

Fast-paced and not a word wasted, this is a classic adventure that calls to mind Stevenson and Buchan. * S.G. MacLean * This is a colourful and fascinating story – the first of what I hope will be many adventures penned by the talented Mr O'Rourke. * Alexander McCall Smith * An energetic historical spy adventure that's quite a ride, full of peril, menace and pursuit! Recommended. * Books.Tea.and.Me blog * A story filled with murders, cryptic messages, a history lesson, slavery, a thrilling chase… A compelling read and an author to watch out for. * Lost in the Land of Books blog * It's got murder, smuggling, lighthouses and half of Burke & Hare. I bloody loved it!!! — Lesley Kelly A rollicking tale that grips the reader from beginning to end and is one I'd heartily recommend. — Willie McIntyre * Scottish Legal News * A beautifully crafted novel… written with a great eye to detail and its pace, storyline and ending all reward the reader. There is definite mileage in Mungo Lyon returning for future missions, though The Crown Agent stands as an excellent novel in its own right. * Undiscovered Scotland * The perfect dark and moody tale to keep you going this autumn… Immensely entertaining and as gripping as you'd hope from a crime novel, I look forward to more Mungo Lyon adventures. * CommonSpace * This highly entertaining debut sits well in a long tradition of Scottish adventure novels and is a perfect winter evening read for fans of intrigue, daring do and jeopardy. * NB Magazine * A classic, colourful and fascinating adventure story… brilliantly told with plenty of derring-do. * Crime Review * The story is fast paced and gripping… An adrenaline-filled adventure. * Scottish Field * An assured debut that unashamedly harks back to classic thrillers… reads like a knowing blend of James Buchan's The 39 Steps and Robert Louis Stevenson's Treasure Island. — Declan Burke * The Irish Times *

Born in Greenock in 1976, Stephen describes himself as Scottish with an Irish twist. He studied Law at Edinburgh and Bologna Universities, is an advocate and a Member of the Institute of Chartered Arbitrators. He formerly contributed a regular column in The Scotsman entitled The Legal World and has published legal and political articles on The Guardian, Caledonian Mercury and Think Scotland websites. In January 2012 he won a short story competition run by The Daily Telegraph’s Creative Writing group, which proved to be the basis for The Crown Agent.