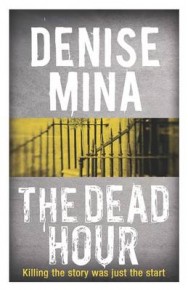 It seemed like just another domestic: a woman bleeding from a head injury behind a smart front door in one of Glasgow’s nicer suburbs. She insists she doesn’t need help, and the well-dressed man with her assures journalist Paddy Meehan that everything is fine. But Paddy is not convinced. Especially when she is given a GBP50 note to keep the story out the papers. The next morning, the woman is dead. Paddy has the story of a lifetime – but will lose everything if word gets out about the bribe. And it seems the police have their own reasons for twisting the evidence. As Paddy pursues the dark and brutal truth, it could make her career – or end her life…

Denise Mina was born in Glasgow in 1966. Because of her father’s job as an engineer, her family moved twenty-one times in eighteen years from Paris to the Hague, London, Scotland and Bergen. After leaving school at sixteen and a run of poorly paid jobs, she went on to study Law at Glasgow University and researched a PhD thesis at Strathclyde. Misusing her grant, she stayed at home and wrote her first novel, Garnethill, which was published in 1998 and won the Crime Writers’ Association John Creasy Dagger for best first crime novel. Since 1998 she has written ten further novels, including most recently, The Red Road. Denise also writes short stories, plays and comics, including writing Hellblazer, the John Constantine series for Vertigo, for a year. Since 2012 she has been adapting the Steig Larsson Millennium Trilogy as graphic novels. She is a regular contributor to TV and radio. In 2012 The End of the Wasp Season won the prestigious Theakstons Old Peculier Crime Novel of the Year Award.