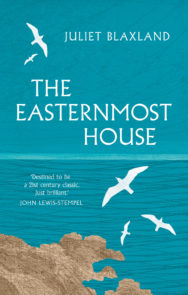 In the not-too-distant future, Juliet Blaxland’s home will be demolished, and the land where it now stands will crumble into the sea. In her numbered days living in the Easternmost House, Juliet fights to maintain the rural ways she grew up with, re-connecting with the beauty, usefulness and erratic terror of the natural world.

The Easternmost House is a stunning memoir, describing a year on the Easternmost edge of England, and exploring how we can preserve delicate ecosystems and livelihoods in the face of rapid environmental change.

Juliet Blaxland is an architect, author, cartoonist and illustrator. She grew up in a remote part of Suffolk and now lives in a house on the edge of a cliff.

She is the author and illustrator of ten children’s books. Her cartoon series, Life in a Listed Building, was published monthly in the Prince of Wales’s architecture magazine Perspectives and won a prize at the Royal Academy Summer Exhibition. The Crowood Press published Nimrod, a Cavalry Black, in 2015, and The House Pony: an ABC of Horsemanship, was published in 2018. She is also a prize-winning photographer.