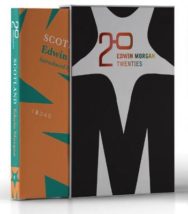 The beginning of the new decade brings with it a celebration of one of Scotland’s most cherished poets, Scotland’s first modern Makar, Edwin Morgan. A son of Glasgow, the city’s first poet Laureate, Morgan wrote about the city he loved, the people in it and about Scotland more widely: the country that he was so passionate about.To mark the centenary, Polygon, an imprint of Birlinn Limited, is repatriating Edwin Morgan back to Scotland where he is to be published again, in association with Carcanet. Morgan was at once a prolific and eclectic writer, whose themes were as diverse as love and science fiction. And to celebrate the diversity of such a loved poet we are publishing five individual, thematically arranged, selected poems. Each book contains twenty poems, works on: love; Scotland; people and places; animals; and space. These volumes are introduced by popular names: Jackie Kay, Liz Lochhead, Ali Smith and Michael Rosen. This box set is sure to be popular with fans of his works and collectors.

Edwin Morgan (1920-2010) became Scotland’s first National Poet, or Makar, in 2004. His poetic output was hardly dimmed by increasing age; Collected Poems (Carcanet, 1990) and Collected Translations (Carcanet, 1996) were succeeded by several later volumes of poetry, including Dreams and Other Nightmares (Mariscat Press, 2010). He was awarded the Queen’s Gold Medal for Poetry in 2000.