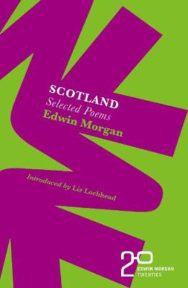 Introduced by Liz Lochhead, in this selection we journey round Scotland in ‘Canedolia’, study its history in ‘Picts’, home in on Morgan’s own city of Glasgow in ‘Glasgow Sonnet v’, imagine the country’s future in ‘The Coin’.

Edwin Morgan (1920-2010) became Scotland’s first National Poet, or Makar, in 2004. His poetic output was hardly dimmed by increasing age; Collected Poems (Carcanet, 1990) and Collected Translations (Carcanet, 1996) were succeeded by several later volumes of poetry, including Dreams and Other Nightmares (Mariscat Press, 2010). He was awarded the Queen’s Gold Medal for Poetry in 2000.Liz Lochhead was born in Motherwell in 1947. Her poetry collections include: Dreaming Frankenstein (Polygon, 1984), True Confessions and New Cliches (Polygon, 1985), Bagpipe Muzak (Penguin, 1991), The Colour of Black & White(Polygon, 2003) and A Choosing (Polygon, 2011). In 2005 Liz became Poet Laureate of Glasgow, and in 2011 she was appointed Scotland’s Makar, succeeding Edwin Morgan. Liz Lochhead was awarded the Queen’s Gold Medal for Poetry (2015).