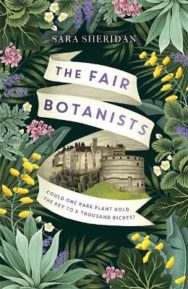 Home > Fiction from Scotland > Historical Fiction > The Fair Botanists: Could one rare plant hold the key to a thousand riches?

The Fair Botanists: Could one rare plant hold the key to a thousand riches?

‘Evocative and sumptuously imagined. A feast for the senses . . . The Fair Botanists is dazzling.’ Celia Reynolds’Sprinkled with deliciously tantalising scandal and intrigue, and colourful, engaging characters. A sheer joy to read.’ Sue Lawrence***Could one rare plant hold the key to a thousand riches?It’s the summer of 1822 and Edinburgh is abuzz with rumours of King George IV’s impending visit. In botanical circles, however, a different kind of excitement has gripped the city. In the newly-installed Botanic Garden, the Agave Americana plant looks set to flower – an event that only occurs once every few decades.When newly widowed Elizabeth arrives in Edinburgh to live with her late husband’s aunt Clementina, she’s determined to put her unhappy past in London behind her. As she settles into her new home, she becomes fascinated by the beautiful Botanic Garden which borders the grand house and offers her services as an artist to record the rare plant’s impending bloom. In this pursuit, she meets Belle Brodie, a vivacious young woman with a passion for botany and the lucrative, dark art of perfume creation.Belle is determined to keep both her real identity and the reason for her interest the Garden secret from her new friend. But as Elizabeth and Belle are about to discover, secrets don’t last long in this Enlightenment city . . .And when they are revealed, they can carry the greatest of consequences.

Reviews of The Fair Botanists: Could one rare plant hold the key to a thousand riches?

The cinematic prologue had me instantly hooked, as did the world of botany, perfume, potions and intrigue. Sara's characters are wonderfully drawn, the writing is so evocative, and sumptuously imagined. Not since Patrick Suskind's Perfume has a book had such a strong sensory impact on me. I was intoxicated! A feast for the senses… The Fair Botanists is dazzling. — Celia Reynolds

Sara Sheridan is an Edinburgh-based writer of over 20 books including cosy crime noir mysteries set in 1950s Britain and historical novels based on the real-life stories of late Georgian and early Victorian explorers. She has also written non-fiction, as well as books for children.Sara has been named one of the Saltire Society’s 365 most influential Scottish women, past and present.