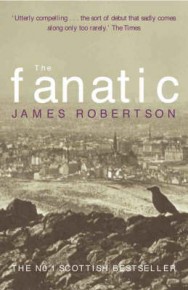 Home > Fiction from Scotland > The Fanatic

An impressive debut from an exciting new Scottish voice – a stunning novel about history, identity and redemption. A no. 2 best-seller in Scotland. It is Spring 1997 and Hugh Hardie needs a ghost for his Tours of Old Edinburgh. Andrew Carlin is the perfect candidate. So, with cape, stick and a plastic rat, Carlin is paid to pretend to be the spirit of Colonel Weir and to scare the tourists. But who is Colonel Weir, executed for witchcraft in 1670. In his research, Carlin is drawn into the past, in particular to James Mitchel, the fanatic and co-congregationist of Weir’s, who was tried in 1676 for the attempted assassination of the Archbishop of St Andrews, James Sharp. Through the story of two moments in history, ‘The Fanatic’ is an extraordinary history of Scotland. It is also the story of betrayals, witch hunts, Puritan exiles, stolen meetings, lost memories, smuggled journeys and talking mirrors which will confirm James Robertson as a distinctive and original Scottish writer.

James Robertson is a journalist, critic and poet. He is the author of two collections of short stories, ‘Close’ and ‘The Ragged Man’s Complaint’, and a collection of Scottish ghost stories. His first novel, ‘The Fanatic’, was published in 2001 and his second, ‘Joseph Knight’ in 2003. He lives in Fife.