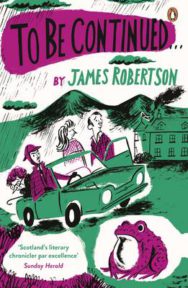 Home > Fiction from Scotland > To be Continued

An utterly mad, entirely heart-warming Highland adventure from the Man Booker-longlisted author of And the Land lay Still Douglas is fifty years old – he’s just lost his job, been kicked out by his girlfriend and moved back into his dad’s house. Just when things are starting to look hopeless, he makes a very unexpected new friend: a talking toad. Mungo is a wise-cracking, straight-talking, no-nonsense kind of toad – and he is determined to get Douglas’s life back on track. Together, man and beast undertake a madcap quest to the distant Highlands, hot on the trail of a hundred-year-old granny, a beautiful Greek nymph, a split-personality alcoholic/teetotaller, a reluctant whisky-smuggler, and the elusive glimmer of redemption …