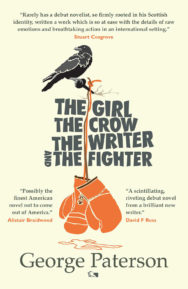 Home > Fiction from Scotland > Crime and Mystery > The Girl, The Crow, The Writer And The Fighter

The Girl, The Crow, The Writer And The Fighter

From the pre and post-war streets of bohemian Paris to the cool azure skies above the Mediterranean, ‘The Girl, The Crow, The Writer and The Fighter’ takes the reader on a visceral, labyrinthine trip with a notorious sexual anarchist, the most dangerous man on the planet and a young woman who finds herself drawn into their complex world of murder, carnality and duplicity.

The book opens in 1965 when provocative author Henry Miller is taken incognito to an infamous title fight. In the turbulent aftermath of the bout, Miller is forced to battle his way through the ensuing melee in order to make a vital connection with the keeper of a tightly guarded secret.

From the estate of an elderly patron, May Morgenstern takes ownership of a bound collection of letters, hitherto unseen correspondence between her late friend and the aforementioned writer in which he not only recounts the story of how he came to be accused of the slaying of the man who fathered her but how his fate came to be linked with that of future heavyweight champion, Sonny Liston. As she delves deeper into the letters, May learns that the truth may be more deadly than fiction.

George Paterson’s epistolary tale of murder and chicanery is a study of chaos in instalments. ‘The Girl, The Crow, The Writer and The Fighter’ is an incendiary, exciting ‘what if?’ page turner which spans continents and lifetimes; a story where desire and intrigue sit, like Chang and Eng, inextricably bound within its own myth.

From Dumas to Devo, Hammett to Huey Lewis, Paterson’s debut novel deftly turns literary convention on its side and fashions an entertaining, yet challenging alternative reality in mystery fiction.

George Paterson is a writer, DJ and musician who, as a member of the bands White and DMP, released a number of well received albums on the Poco Alto Label. His work can be found in a number of independent feature length and short films as well as providing the musical backdrop to the London stage production of the play, ‘ISM’.

Since returning to Scotland in 2017, his focus has been split between the spoken word – his popular weekly ‘Lost in Music’ radio show – and the written, with articles appearing in a number of online publications before finding a home as a regular features writer and reviewer for INTO Creative.

In addition, he has written two screenplays and one feature length ‘coming of age’ story, serialised on INTO, called ‘Everybody Wants to Rule the World’.