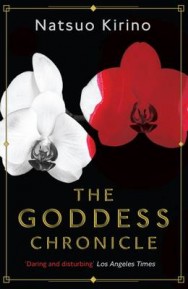 On an island the shape of a tear drop live two sisters. One is the Oracle, the other is damned. One is admired far and wide. The other must sacrifice her life to fulfill her destiny. But what will happen when she returns to the island for revenge?

Natuso Kirino is a leading figure in the recent boom of female writers of Japanese hard-boiled crime fiction. A prolific writer, she is most famous for her 1998 novel, Out, which received the Grand Prix for Crime Fiction, Japan’s top mystery award and was a finalist (in translation) for the 2004 Edgar Award. So far, four of her novels have been translated into English: Out, Grotesque, Real World and What Remains. Rebecca Copeland is a professor of Japanese literature at Washington University in St. Louis, Missouri, where her research and teaching focuses on women, gender, and translation studies. A fan of Natsuo Kirino’s work, she also translated her 2003 novel Grotesque