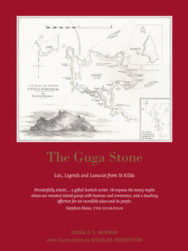 The Guga Stone: Lies, Legends and Lunacies from St Kilda

In 1930, the last inhabitants of the isle of St Kilda were evacuated to the mainland. Shortly afterwards, following several acts of vandalism by local fishermen, Calum MacKinnon was sent back to the island to guard against further damage. Alone on the deserted island, he begins to re-imagine the conversations and stories from his years in the island port of Village Bay. He also recalls some of the experiences of its people in exile on the mainland, showing their difficulties in adjusting to a new way of life, and a diet no longer based mainly on seabirds. The vivid prose is interspersed with poetry and illustrations, creating a colourful and insightful ficionalisation of life on remote St Kilda.

Reviews of The Guga Stone: Lies, Legends and Lunacies from St Kilda

DONALD S. MURRAY comes from Ness in Lewis but now lives in Shetland. A poet, author, teacher and occasional journalist, Donald’s books range from in tone and content from The Guga Hunters and And On This Rock (Birlinn) to Small Expectations (Two Ravens Press) and Weaving Songs (Acair). He has been awarded the Jessie Kesson Writing Fellowship and the Robert Louis Stevenson Fellowship. He has also been shortlisted for the Saltire First Book Award and the Callum Macdonald Memorial Award. DOUGLAS ROBERTSON comes from Dundee but now lives in Hampshire. Artist, teacher and occasional poet, he has worked on numerous collaborations with poets and authors throughout his career. His work is held in public collections throughout the UK.