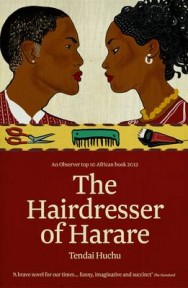 Home > Fiction from Scotland > The Hairdresser of Harare

The Hairdresser of Harare

Vimbai is the star hairdresser of her salon, the smartest in Harare, Zimbabwe, until the enigmatic Dumisani appears. Losing many of her best customers to this good-looking, smooth-talking young man, Vimbai fears for her job, vital if she’s to provide for her young child. But in a remarkable reversal the two becomes allies, Dumi renting a room from Vimbai, then inviting her to a family wedding, where to her surprise, he introduces her to his rich parents as his ‘girlfriend’. Soon they are running their own Harare salon, attracting the wealthiest and most powerful clients in the city. But disaster is near, as Vimbai soon uncovers Dumi’s secret, a discovery that will result in brutality and tragedy, testing their relationship to the very limit. Voted an Observer Top Ten Contemporary African Book 2012 and nominated for The Guardian’s Not the Booker Prize 2011. The Hairdresser of Harare is a stylish, funny and sophisticated first-hand account of life today in Zimbabwe’s capital city, confounding stereotypes and challenging injustice with equal fearlessness.This is an upbeat, charming, but at times heart breaking, story of friendship, prejudice and forgiveness from the heart of contemporary Africa.

Reviews of The Hairdresser of Harare

'The Hairdresser of Harare dives into a world so alive and full of feeling that it is hard to reconcile the image with that of dying Zimbabwe which is so often portrayed in the news – Tendai Huchu has crafted a wonderful novel out of a simple, yet emotionally complex situation.' Cape Argus 'This glorious book defies classification with its astute sociopolitical commentary nestling inside the appealing, often comic story of a young woman who will not accept defeat. With a light touch and real skill, Huchu takes us through the life-sapping economic realities of contemporary Harare – ' The Observer 'A brave novel for our times… funny, imaginative and succinct' The Standard

Tendai Huchu was born in 1982 in Bindura, Zimbabwe. He attended Churchill High School in Harare and from there went to the University of Zimbabwe to study a degree in Mining Engineering. He dropped out in the middle of the first semester, found work briefly in a casino and from there drifted from one job to the next. Four years later he returned to university and is now a podiatrist living in Edinburgh.