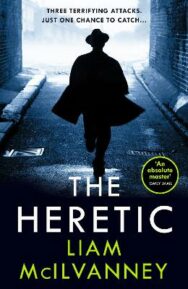 Home > Fiction from Scotland > The Heretic

From the award-winning author comes a much-anticipated sequel to the Scottish Crime Book of the Year The Quaker…Glasgow 1975A deadly fireAn arson attack on a Glasgow warehouse causes the deaths of a young mother and child.Police suspect it’s the latest act in a brutal gang warfare that’s tearing the city apart – one that DI Duncan McCormack has been tasked with stopping.A brutal murderFive years ago he was walking on water as the cop who tracked down a notorious serial killer. But he made powerful enemies and when a mutilated body is found in a Tradeston slum,McCormack is assigned a case that no one wants. The dead man is wearing a masonic ring, though, and Duncan realizes the victim is not the down-and-out his boss had first assumed.A catastrophic explosionAs McCormack looks into both crimes, the investigations are disrupted by a shocking event.A bomb rips through a pub packed with people – and a cop is killed in the blast. The cases are stacking up and with one of his own unit now dead, McCormack is in the firing line.But he’s starting to see a thread – one that connects all three attacks…

Reviews of The Heretic

Praise for Liam McIlvanney:'Gripping, twisted, and bristling with atmosphere and memorable characters, The Heretic cements Liam's position as a crime writer at the top of his game.' Stuart MacBride'McIlvanney writes with graceful skill and the characters in The Heretic are wonderfully drawn. All in all an excellent read' James Oswald'Gripping and suspenseful plot' Sunday Times Scotland'Terrific Stuff' Shotsmag'It's a complex plot and McCormack is an appealing figure, but the star of the book is the city itself – mad, bad and dangerous to know.' The Sun'The Heretic is an outstanding example of Tartan Noir… McIlvanney is a fine craftsman who knows just what he is doing and how to do it' The Scotsman'Liam McIlvanney's The Heretic, his forthcoming sequel to his prize-winning The Quaker, is equally big, equally bold, even more impressive.' Mick Herron'McIlvanney is an enormous talent and his writing brims with compassion, lyricism and good old-fashioned thrills.' Adrian McKinty'As soon as I finished it, I looked forward to reading it again. Not only did I love the evocative recreation of Glasgow but the characters created were refreshing and surprising.' Susan Calman'Every aspect of The Quaker is superb' Washington Post'A vivid portrayal of a city' Sun'A totally gripping murder mystery, thought provoking but thoroughly entertaining' NB Magazine'Pacy, inventive, assured – and authentic … a story of brilliantly crafted shifts of plot and pace … McIlvanney is a writer with unfolding, developing and substantial gifts' The Herald'Skilfully dovetailed … atmospheric … a solidly crafted and satisfying detective story' Laura Wilson, Guardian'An absolute master of Tartan noir … the corruption of the late Sixties is splendidly evoked, as is DI Duncan McCormack' Daily Mail

Liam McIlvanney was born in Scotland and studied at the universities of Glasgow and Oxford. He has written for numerous publications, including the London Review of Books, the Times Literary Supplement and the Guardian. His debut, Burns the Radical, won the Saltire First Book Award, and his most recent book, Where the Dead Men Go, won the Ngaio Marsh Award for Best Crime Novel. The Quaker won the 2018 McIlvanney Prize for Scottish Crime Novel of the Year.He is Stuart Professor of Scottish Studies at the University of Otago, New Zealand. He lives in Dunedin with his wife and four sons.

Akemi Dawn Bowman is the author of William C. Morris Award Finalist Starfish, Summer Bird Blue, and Harley in the Sky. Her sci-fi series, The Infinity Courts, was published in 2021, followed by her middle-grade debut, Generation Misfits. A proud Ravenc …