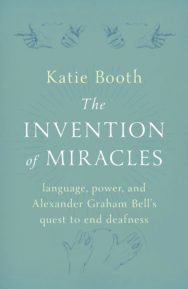 Home > Health and Lifestyle > Family & Health > The Invention of Miracles

The Invention of Miracles

A revelatory revisionist biography of Alexander Graham Bell ― renowned inventor of the telephone.

When Alexander Graham Bell first unveiled his telephone to the world, it was considered miraculous. But few people know that it was inspired by another supposed miracle: his work teaching the deaf to speak. The son of one deaf woman and husband to another, he was motivated by a desire to empower deaf people by integrating them into the hearing world, but he ended up becoming their most powerful enemy, waging a war against sign language and deaf culture that still rages today.

The Invention of Miracles tells the dual stories of Bell’s remarkable, world-changing invention and his dangerous ethnocide of deaf culture and language. It also charts the rise of deaf activism and tells the triumphant tale of a community reclaiming a once-forbidden language.

Katie Booth has researched this story for over a decade, poring over Bell’s papers, Library of Congress archives, and the records of deaf schools around America. Witnessing the damaging impact of Bell’s legacy on her deaf family set her on a path that upturned everything she thought she knew about language, power, deafness, and technology.

Katie Booth teaches writing at the University of Pittsburgh. Her work has appeared in The Believer, Aeon, Catapult, and Harper’s Magazine, and has been highlighted on Longreads and Longform; ‘The Sign for This’ was a notable essay in the 2016 edition of Best American Essays. Booth received a number of prestigious fellowships to support the writing of The Invention of Miracles, including from the Library of Congress and the Massachusetts Historical Society. She was raised in a mixed hearing/deaf family.