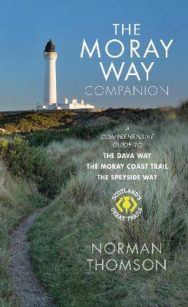 The Moray Way Companion: A Comprehensive Guide to The Dava Way, The Moray Coast Trail and the Speyside Way

The Moray Way consists of all or part of three previously existing routes: the Moray Coast Trail, the Speyside Way and the Dava Way. Together they cover a huge and varied range of landscapes.This book is the ideal guide to much of what this beautiful and richly historical part of Scotland has to offer.The largest town, Forres, is an ancient royal burgh. Between it and the next biggest town of Lossiemouth lie the coastal villages of Findhorn, Burghead and Hopeman, connected by some of Scotland’s finest coastal scenery and beaches.Eastwards, beyond intact remains of second world war defences, lie Garmouth and Fochabers, the former, many centuries ago, the main port of Moray Here the Moray Way turns south, following a course through the fertile Spey valley. Its many distilleries are part of the considerable variety of interest as the route continues to the resort town of Grantown. A final stage northward crosses the wild openness of Dava Moor, reaching eventually the spectacular Divie viaduct where there is a dramatic change to gentler woodlands and pastoral landscapes as the trail leads back to Forres.

Norman Thomson has been charmed by the Moray countryside since first encountering it in boyhood. After some years teaching at Gordonstoun he moved to England but kept returning on holidays before making it his permanent retirement home. In 2009 he and Ann Dunn launched the concept of the Moray Way and later helped co-found Moray Walking Festival, which has now grown into the increasingly popular Moray Walking & Outdoor Festival.