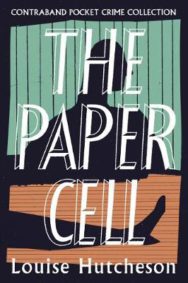 From the publisher of Graeme Macrae Burnet’s His Bloody Project, the first in a new series of distinctive, standalone crime stories, each with a literary bent. In 1950s London, a literary agent finds fame when he secretly steals a young woman’s brilliant novel manuscript and publishes it under his own name, Lewis Carson. Two days after their meeting, the woman is found strangled on Peckham Rye Common: did Lewis purloin the manuscript as an act of callous opportunism, or as the spoils of a calculated murder?

Reviews of The Paper Cell

"One of the most exciting developments in Scottish publishing of recent times is Contraband… a place to find offbeat, interesting and quality fiction." – Alistair Braidwood, ScotsWhayHae. Contraband/Saraband: Inaugural Saltire Society Scottish Publisher of the Year WINNER 2013, SHORTLISTED 2015 & 2016. Publisher of Graeme Macrae Burnet's His Bloody Project, shortlisted for the Man Booker Prize 2016. Two Contraband novels have been shortlisted for the Bloody Scotland Crime Book of the Year (in 2014 and 2015 respectively): Falling Fast by Neil Broadfoot and DM for Murder by Matt Bendoris.

Louise Hutcheson has a PhD in Scottish Literature from the University of Glasgow. She works in broadcast and digital media and is a freelance editor who has edited a number of crime novels and other fiction. Louise also created and runs a highly respected review site for new fiction.