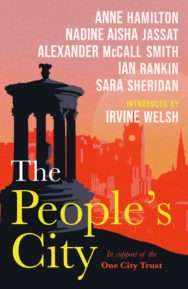 Home > Fiction from Scotland > The People’s City: One City Trust

The People’s City: One City Trust

The world’s first UNESCO city of literature, Edinburgh is steeped in literary history. It is the birthplace of a beloved cast of fictional characters from Sherlock Holmes to Harry Potter. It is the home of the Writer’s Museum, where quotes from writers of the past pave the steps leading up to it. A city whose beauty is matched only by the intrigue of its past, and where Robert Louis Stevenson said, ‘there are no stars so lovely as Edinburgh’s street-lamps’. And to celebrate the city, its literature, and more importantly, its people, Polygon and the One City Trust have brought together writers – established and emerging – to write about the place they call home.

Based around landmarks or significant links to Edinburgh each story transports the reader to a different decade in the city’s recent past. Through these stories each author reflects on the changes, both generational and physical, in the city in which we live.

Nadine Aisha Jassat is the author of poetry collection Let Me Tell You This (404 Ink) and was named in Jackie Kay’s International Literature Showcase Selection of 10 Compelling ‘BAME’ writers working in the UK.Anne Hamilton is the author of the travel memoir, A Blonde Bengali Wife. She lives in Edinburgh with her young son.Alexander McCall Smith is the author of the highly successful No. 1 Ladies’ Detective Agency series, which has sold over twenty-five million copies. Since then he has seen his various series of books translated into over forty-six languages and become bestsellers throughout the world.Ian Rankin is a Scottish crime writer, best known for his Inspector Rebus novels.Sara Sheridan is the author of the Mirabelle Bevan Murder Mysteries and Where are the Women.