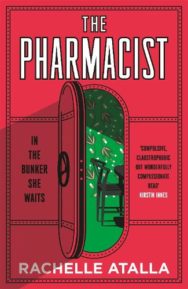 The bunker is designed to keep them all safe, but is it the place of greatest danger?

In the end, very few people made it to the bunker. Now they wait there for the outside world to heal. Wolfe is one of the lucky ones. She’s safe and employed as the bunker’s pharmacist, doling out medicine under the watchful eye of their increasingly erratic and paranoid leader.

But when the leader starts to ask things of Wolfe, favours she can hardly say no to, it seems her luck is running out. Forming an unlikely alliance with the young Doctor Stirling, her troubled assistant Levitt, and Canavan – a tattooed giant of a man who’s purpose in the bunker is a mystery – Wolfe must navigate the powder keg of life underground where one misstep will light the fuse. The walls that keep her safe also have her trapped.

Reviews of The Pharmacist

'A compulsive, claustrophobic but wonderfully compassionate read, beautifully written and set within a brilliantly realised world. Rachelle Atalla is a major talent and I can't wait to see where her mind goes next' KIRSTIN INNES, AUTHOR OF SCABBY QUEEN

Rachelle Atalla is a Scottish-Egyptian novelist, short story writer and screenwriter based in Glasgow, who previously worked as a community pharmacist for a decade. Thankfully she has yet to be locked in a bunker, but there is still time. Her short stories have been published widely in literary anthologies; she is the recipient of a Scottish Book Trust New Writers Award and co-edits New Writing Scotland. Her first short film screenplay Trifle was commissioned by the Scottish Film & Talent Network, and most recently Rachelle was selected to participate in the 2021 Young Films Foundation Skye residency programme, developing her first feature length screenplay with BBC Films.