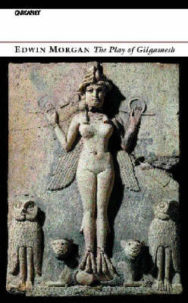 The Play of Gilgamesh

Edwin Morgan’s verse play translation of the Sumerian epic of Gilgamesh brings an ancient story to life in a supple, vigorous idiom that moves easily between ritual, comedy and moments of intense beauty. Here a god-king, a great city builder, learns the timeless truth that the only immortality lies in what will be remembered and recorded of his actions. Gilgamesh’s quest takes him, and the audience, on a journey through a world that is both mythic and familiar, inhabited by terrifying demons and ‘disappeared’ political prisoners, by gods and singing transvestites and a Glaswegian jester–and by Enkidu, the beloved child of nature who dies of a virus in the blood, through whom Gilgamesh learns to understand the meaning of loss. Received a Poetry Book Society Special Commendation.

Reviews of The Play of Gilgamesh

'Morgan is not only a poet of Glasgow, but of all Scotland, and beyond.' – The Guardian. 'Now in his eighties, Morgan is the most influential Scottish poet since Hugh MacDiarmid.' – The London Review of Books.

Born in Glasgow in 1920, EDWIN MORGAN served for six years in the Middle East with the Royal Army Medical Corps and on his return completed his Master’s degree at Glasgow University. He became Professor of English in 1975, retiring as Professor Emeritus in 1980. Morgan is an adept linguist, particularly in Russian, French, Italian, German, Spanish, Portuguese and Hungarian. He has received a Queen’s Gold Award for Poetry, the Royal Bank of Scotland Book of the Year Award in 1983, the Soros Translation Award (New York) 1985 and many other prizes. Virtual and Other Realities won the Stakis Prize for the Scottish Writer of the Year 1998.