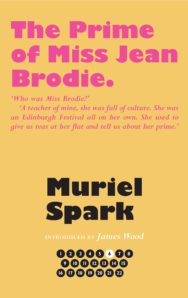 The Prime of Miss Jean Brodie

Edinburgh, 1930, and the world is on the brink of change. Leading the charge is the glamorous, free-spirited Miss Jean Brodie, schoolteacher at the Marcia Blaine Academy, whose guiding principle is ‘Give me a girl at an impressionable age and she’ll be mine for life. I am dedicated to you in my prime.’ While Miss Brodie manipulates and charms ‘her girls’ – known as the Brodie Set – with notions of romance and heroism, tragedy and a cruel betrayal beckon.

The introduction is by Alan Taylor who has contributed to numerous publications, including the TLS, The New Yorker and The Melbourne Age, and edited four acclaimed anthologies – The Assassin’s Cloak (2000), The Secret Annexe (2004), The Country Diaries(2009) and most recently, Glasgow: The Autobiography (2016).