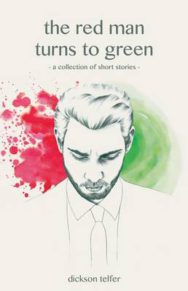 Home > Fiction from Scotland > The Red Man Turns to Green: An Assortment of Short Stories

The Red Man Turns to Green: An Assortment of Short Stories

When the red man turns to green,walk yourself into a world where killing a spider triggers vivid flashbacks; where unrequited love is never forgotten; where a shopping trip to Asda is a form of counselling; where filming for YouTube leads to more than mere voyeurism; where the sheep are very often blue; and where tea is the answer. In this enigmatic debut collection, Dickson Telfer plunges his characters into profound and occasionally unsettling situations and watches them stew, fumble, thrive and flourish. Quirky, funny and alternative, his observations on everyday life make this collection eminently enjoyable.

Reviews of The Red Man Turns to Green: An Assortment of Short Stories

"Dickson Telfer is the real deal and this debut collection is a sawn-off shotgun scattering humour, horror, sugar and grit. Get too close and its honesty will take your face off. Can't wait to see what Telfer does after he's reloaded." Alan Bissett, Author of Pack Men and The Moira Monologues "Guaranteed to challenge your perceptions, pre-conceived or otherwise, Telfer's whacky take on life will never leave you feeling indifferent." Neal Sillars, author of A Conspiracy of Ravens and If You Fly with the Crows. "Dickson Telfer's darkly comic tales sparkle like black diamonds. Written in a style as clean and direct as a switchblade, these stories cut through the mundane surface of modern life to reveal the disturbing, funny, surreal truths that lie beneath the quiet desperation. The Red Man Turns to Green is a sensational debut collection, full of surprises and dark pleasures, permeated with a generous compassion for the human condition." Vicki Jarrett, author of Nothing is Heavy

Dickson Telfer is a writer, playwright and performer who lives in Central Scotland with his partner. He works in learning development in the HE sector, playing with words under an academic literacies umbrella. When he isn’t writing, his spare time is spent playing guitars, going out in Edinburgh and following East Stirlingshire FC.