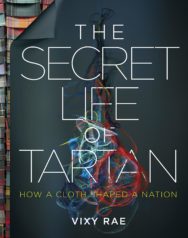 Home > Art, Architecture & Photography > Art and Design > Art History > The Secret Life of Tartan: How a Cloth Shaped a Nation

The Secret Life of Tartan: How a Cloth Shaped a Nation

Tartan is so much more than just a cloth. From its clan origins in the Scottish Highlands to the catwalks of Milan, London and New York, from its regimental history to its anti-establishment status, tartan has not only shaped a nation but has become an international style icon.

The Secret Life of Tartan is as colourful and interwoven as the threads of the fabric itself. From troops in Black Watch tartan controlling Highland rebels to the Balmoral tartan exclusively worn by royalty, from the first tartan on the moon to the pattern of choice for punk and high fashion alike, tartan truly has a remarkable universal status.

Today, tartan evokes history, kinship, tradition, romance, irreverence, fashion and style. The Secret Life of Tartan unravels the truths and the myths of the cloth that shaped a nation to reveal how it has captured hearts around the world.

Reviews of The Secret Life of Tartan: How a Cloth Shaped a Nation

'There is so much to tartan there's a stirring and romantic history, a science, and a treasure trove of fascinating stories. This book is all of that, and more. A delight for the senses.' Alexander McCall Smith

'Vixy's energy and passion for provenance jump out from every page tartan with a tailored twist!' John McLeish, Chairman, The Scottish Tartans Authority

'Vixy Rae takes the tat out of tartan and makes you feel resplendently cool and modern.' Shauna Macdonald

'Vixy at Stewart Christie has found the missing link, providing a unique bond between our history and traditional customs with a much-needed contemporary feel. They really capture the essence of Scottish heritage.' Sam Heughan, Outlander star

Before Vixy Rae took over Stewart Christie & Co, this Edinburgh institution was run by four generations of men named Duncan Lowe. Stewart Christie prides itself on garments of such quality and appeal that they last for decades.Vixy is the first female member of The Incorporation of Edinburgh Tailors, a trade body which dates back more than six centuries.