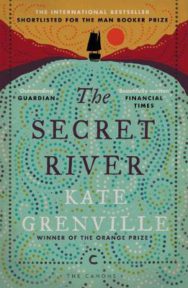 SHORTLISTED FOR THE MAN BOOKER PRIZEWINNER OF THE 2006 COMMONWEALTH WRITERS’ PRIZELONGLISTED FOR THE IMPAC DUBLIN PRIZELondon, 1806. William Thornhill, happily wedded to his childhood sweetheart Sal, is a waterman on the River Thames. Life is tough but bearable until William makes a mistake, a bad mistake for which he and his family are made to pay dearly.His sentence: to be transported to New South Wales for the term of his natural life. Soon Thornhill, a man no better or worse than most, has to make the most difficult decision of his life.

Reviews of The Secret River

An outstanding study of cultures in collision . . . a chilling, meticulous account of the sorrows and evils of colonialism . . . Kate Grenville is a sophisticated writer * * Guardian * * Splendidly paced, passionate and disturbing * * The Times * * This is a novel everyone should read * * Irish Times * * A vivid and moving portrayal of poverty, struggle and the search for peace * * Independent * * Beautifully written * * Financial Times * * Sumptuous . . . Brilliantly atmospheric * * Independent on Sunday * * A rich novel of character * * Sunday Telegraph * * A magnificent novel – an unflinching exploration of modern Australia's origins * * New Yorker * * Here is someone who can really write — PETER CAREY Reading The Secret River may put you off anything less accomplished for a while * * Daily Express * *

Kate Grenville’s bestselling novel The Secret River received the Commonwealth Writers’ Prize, and was shortlisted for the Man Booker Prize and the Miles Franklin Literary Award. The Idea of Perfection won the Orange Prize. Grenville’s other novels include Sarah Thornhill, The Lieutenant, Lilian’s Story, Dark Places and Joan Makes History.