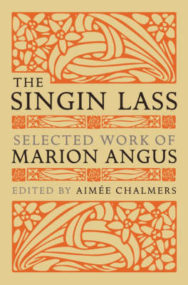 As a young, strong-willed Victorian “new woman” in Arbroath, Marion wrote colourful, witty and perceptive diaries and articles which revealed her to be knowledgeable, well-travelled, cultured and opinionated. After the death of her father in 1902, however, she assumed a traditional female role, caring for her mother and younger sister. It was not until freed of family responsibilities during the First World War that she started to write poetry. In 1931, at the age of 66, Marion became effectively homeless after serious family problems. She began to live a peripatetic existence, staying with family and friends and in a series of lodgings for thirteen years until taken to Arbroath to be looked after by Miss Williamina Matthew, an “intimate friend”, for the last two years of her life. Marion’s work is modern and imaginative in its approach. The apparent simplicity of her strong and hauntingly sympathetic lyrical poetry is deceptive. This publication is supported by Angus Council’s Cultural Services.

Aimee Chalmers was raised in Montrose and spent her early career helping disadvantaged youngsters find their identity through creativity. She has been concentrating on her own creative writing since 2002, and has an MPhil from Glasgow University. She is now completing a PhD at St Andrew’s University. She is the current of the Scots Language Society’s Robert McLennan Tassie, for the best short story in Scots.