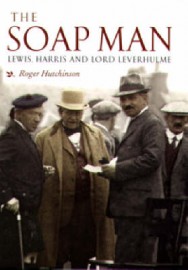 In 1918, as the First World War was drawing to a close, the eminent liberal industrial Lord Leverhulme bought – lock, stock and barrel – the Hebridean island of Lewis. His intention was to revolutionise the lives and environments of its 30,000 people, and those of neighbouring Harris, which he shortly added to his estate. For the next five years a state of conflict reigned in the Hebrides. Island seamen and servicemen returned from the war to discover a new landlord whose declared aim was to uproot their identity as independent crofter/fishermen and turn them into tenured wage-owners. They fought back, and this is the story of that fight. The confrontation resulted in riot and land seizure and imprisonment for the islanders and the ultimate defeat for one of the most powerful men of his day. The Soap Man paints a beguiling portrait of the driven figure of Lord Leverhulme, but also looks for the first time at the infantry of his opposition: the men and women of Lewis and Harris who for long hard years fought the law, their landowner, local business opinion and the entire media, to preserve the settled crofting population of their islands.

Roger Hutchinson is an award-winning author and journalist. After working as an editor in London, in 1977 he joined the West Highland Free Press in Skye. Since then he has published thirteen books, including Polly: The True Story Behind Whisky Galore; an acclaimed literary biography of James Boswell; a definitive history of the 1966 World Cup; and a life of Aleister Crowley. He is still attached to the WHFP as editor and columnist, and has written for BBC Radio, The Scotsman, the Guardian, The Herald and the Literary Review. He lives on the Hebridean island of Raasay.