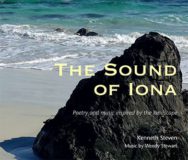 The Sound of Iona

Poetry and music inspired by the landscape.

‘It was Jane MacFadyen on Iona who first gave me the idea of recording an island soundscape,’ says Kenneth Steven. ‘The best ideas are often the most obvious, and finally it has been made: a melding of the wind and the waves, the laughter of children, the sounds of birds, together with some of the poems I have written over the years. This soundscape is for those who know Iona as much as it’s for those who have always wanted to find a way of reaching Columba’s holy isle.’

With music by Wendy Stewart. Produced and engineered by Mark Rickards.

Kenneth Steven is a poet, novelist and children’s writer. He has also written and presented numerous poetry-related programmes for BBC Radio. Kenneth has known Iona from childhood: from that time he has felt it to be his spiritual home.

Wendy Stewart is a leading Scottish harper, a world-class performer and inspirational teacher whose style and repertoire encompasses both traditional music and her own compositions:www.cairnwatermusic.com

Mark Rickards is a senior producer with BBC Scotland and has recorded wild sounds from across Scotland and the world.