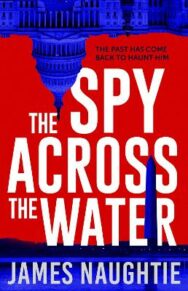 Home > Fiction from Scotland > The Spy Across the Water

The Spy Across the Water

From one of our most treasured BBC broadcasters, The Spy Across the Water is the the third instalment in James Naughtie’s brilliant spy series, woven around three brothers bound together forever through espionage.We live with our history, but it can kill us.Faces from the past appear from nowhere at a family funeral, and Will Flemyng, spy-turned-ambassador, is drawn into twin mysteries that threaten everything he holds dear.From Washington, he’s pitched back into the Troubles in Northern Ireland and an explosive secret hidden deep in the most dangerous but fulfilling friendship he has known.And while he confronts shadowy adversaries in American streets, and looks for solace at home in the Scottish Highlands, he discovers that his government’s most precious Cold War agent is in mortal danger and needs his help to survive.In an electric story of courage and betrayal, Flemyng learns the truth that his life has left him a man with many friends, but still alone.Praise for James Naughtie:’As convincing as any of John le Carre’s.’ Independent’The Madness of July is one hell of a debut and one hell of a read. Beautifully written, deftly plotted, skilfully paced, imaginatively conceived.’ Robert Littell’His first novel was good. This is even better… An involved and beautifully plotted spy story.’ Allan Massie’Hugely gripping and atmospheric.’ Mail on Sunday’Complex and psychologically detailed.’ Charles Cumming’A tour de force.’ Kate Mosse

Reviews of The Spy Across the Water

James Naughtie is a special correspondent for BBC News, for which he has reported from around the world. He presented Today on BBC Radio 4 for 21 years. This his third novel, and his most recent book is an account of five decades of travel and work in the United States – On the Road: American Adventures from Nixon to Trump. He lives in Edinburgh and London.