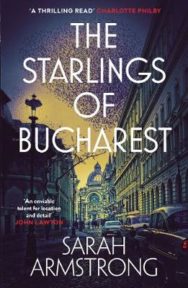 Home > Fiction from Scotland > The Starlings of Bucharest

The Starlings of Bucharest

Ted wants to be a proper journalist rather than a film critic, but at least the travel is good. He arrives in Bucharest to interview a renowned film director, but suspects the man he sees is an imposter. His guide, Vasile, has involved him in a more interesting story about a missing girl, a puzzle Ted aims to solve while he’s in Moscow at the 1975 International Film Festival. In Moscow, though, the mystery deepens, and Ted finds himself asked to do more than a few dubious favours.

Reviews of The Starlings of Bucharest

'A highly effective, and often disquieting, study of human beings being alienated and remoulded by a climate of constant surveillance, threats and manipulation.' * The Herald * 'A beautifully detailed corrective to the kiss-kiss bang-bang of far too many spy novels.' * The Irish Times * 'A mesmerising, evocative novel in which characterisation and narrative tension are in perfect balance.' — Barry Forshaw

Sarah Armstrong’s short stories have been published in magazines and anthologies, and she teaches undergraduate and postgraduate creative writing with the Open University. Sarah lives in Colchester with her husband and four children.