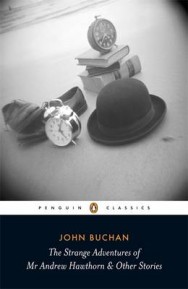 The Strange Adventures of Mr Andrew Hawthorn and Other Stories

In “The Strange Adventures of Mr Andrew Hawthorn” and the other stories in this collection, peculiar worlds of temptation, adventure or iniquity are perilously close at hand. Mr. Hawthorn himself steps outside to allow his porridge to cool and disappears for five years and more, a Glasgow grocer is shipwrecked and ultimately worshipped as a god, a young mathematician discovers an entirely new aspect of reality and becomes terrified by what he finds there, and an ageing sinner clings grimly, weakly to a hard-won life of decency: John Buchan in each demonstrating his abilities as a gripping writer of short stories. In his introduction, Giles Foden explores Buchan’s innate sense of the fascination held by sudden jeopardy and vanished comfort, and the themes of the will and fate in his work.

John Buchan was born in Perth. He was an Imperial statesman, MP, Barrister, and soldier as well as a writer. His first success as an author came with Prester John in 1910, followed by a series of adventure thrillers, or ‘shockers’ as he called them, all characterized by their authentically rendered backgrounds, romantic characters, their atmosphere of expectancy and world-wide conspiracies, and the author’s own enthusiasm. Giles Foden was born in Warwickshire in 1967. His family moved to Malawi in 1972 where he was brought up. His first novel, the acclaimed The Last King of Scotland (1998), is set during Idi Amin’s rule of Uganda in the 1970s and won the Whitbread First Novel Award.