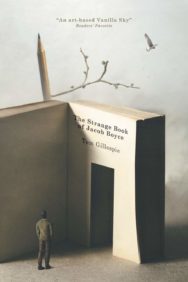 The Strange Book of Jacob Boyce

A spiralling obsession. A missing wife. A terrifying secret. Will he find her before it’s too late?

When Dr Jacob Boyce’s wife goes missing, the police put it down to a simple marital dispute. Jacob, however, fears something darker. Following her trail to Spain, he becomes convinced that Ella’s disappearance is tied to a mysterious painting whose hidden geometric and numerical riddles he’s been obsessively trying to solve for months. Obscure, hallucinogenic clues, and bizarre, larger-than-life characters, guide an increasingly unhinged Jacob through a nightmarish Spanish landscape to an art forger’s studio in Madrid, where he comes face-to-face with a centuries-old horror, and the terrifying, mind-bending, truth about his wife.

Tom Gillespie is a Scottish-born novel and short story writer, now living in exile in Bath, England. His stories have been published worldwide in journals, e-zines and creative anthologies including East of the Web, Linden Literary Review, Untitled, and The Ogilvie. His work also features in The Federation of Writers (Scotland) New Voices Anthology, 2019.  Tom’s latest novel, The Strange Book of Jacob Boyce, has been praised by critics as ‘utterly spellbinding’, ‘brilliantly unsettling’, ‘obsessively compelling’, and ‘a modern-day masterpiece.’

Tom is a graduate of Glasgow University and alongside his writing habit, he works as an English lecturer.