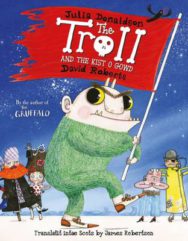 Home > Children's > Young Children's and Early Learning > Picture Books > The Troll and the Kist o Gowd: The Troll in Scots

The Troll and the Kist o Gowd: The Troll in Scots

There wis yince a troll that steyed ablow a brig.(That’s jist whaur trolls are meant tae stey.)Meanwhile, awa oot tae sea, there wis some pirates that steyed in a ship. (And that’s jist whaur pirates are meant tae stey.)Trolls, they say, are meant tae eat goats, but nae goats cam teeter-totterin ower this troll’s wee brig. Sae he ate fush insteid.So begins this hilarious tale of the adventures of a bunch of incompetent pirates who can’t cook, and a crabbit auld troll who can. Their lives seem very far apart: the troll, whose favourite dish is goat, tries and fails to eat the creatures crossing various bridges he hides under; the pirates, who like to eat fish, try and fail to find buried treasure. But by a series of coincidences their paths cross – with dramatic consequences!

Julia Donaldson, the 2011-2013 Children’s Laureate, is the outrageously talented, prize-winning author of the world’s most-loved picture books including The Gruffalo and What the Ladybird Heard. The Gruffalo, is now a children’s classic and publishing phenomenon; celebrating 15 years in 2014, selling over 3 million copies worldwide.James Robertson is a novelist and poet, who writes in both Scots and English for adults and bairns. He has translated many books into Scots, such as A.A. Milne’s Winnie-the-Pooh stories, Roald Dahl’s Fantastic Mr Fox (as The Sleekit Mr Tod), and books by Julia Donaldson including The Gruffalo, The Gruffalo’s Child (The Gruffalo’s Wean), Room on the Broom, The Highway Rat (The Reiver Rat) and What the Ladybird Heard (Whit the Clockleddy Heard). He is a co-founder of the Itchy Coo imprint and its general editor as well as a contributing author.