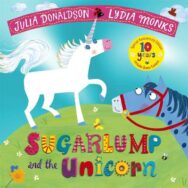 Celebrate 10 years of Sugarlump and the Unicorn, written and illustrated by the bestselling partnership, Julia Donaldson and Lydia Monks, with this special anniversary edition featuring the much-loved story and brand new bonus content.When Sugarlump the rocking horse longs to see the world, a magical unicorn with a silver horn and sparkling blue eyes grants his wish and turns him into a real horse. But after trotting around the farm, galloping around a racetrack and even dancing at the circus, Sugarlump learns to be careful what he wishes for. Luckily the unicorn has one more wish to grant . . .Includes a specially written letter, images and photos from the author and illustrator about how they came up with the idea for the story and characters.Enjoy all the stories from Julia Donaldson and Lydia Monks: Sharing a Shell, The Princess and the Wizard, The Rhyming Rabbit, The Singing Mermaid, Princess Mirror-Belle and the Dragon Pox and the bestselling, What The Ladybird Heard series.