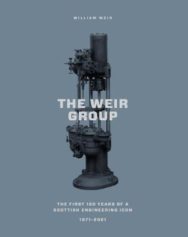 In 1871 two brothers, George and James Weir, founded the engineering firm of G. & J. Weir, one of a booming range of industry on the west coast of Scotland. At their Cathcart works in Glasgow the Weirs produced their own groundbreaking inventions, all crucial to the development of steam ships at that time.Today, 130 turbulent years later, the Weir Group is almost the last of those once-flourishing companies still to retain its independence and its Scottish base.Over the intervening century, Weirs manufactured pumps and valves for ships’ engines around the world, oil pipelines and desalination plants, armaments (in the two world wars), and heavy equipment for power stations. Along the way it was briefly involved in autogiros (the precursor of the helicopter). Rooted in the inventiveness and determination of the Victorian manufacturing age, Weirs adapted to the changing world of the twentieth century, determined always to diversify, win overseas contracts, build partnerships and above all survive.This fascinating story is told by William Weir, a past chairman and chief executive of the company. Combining reminiscence and colourful anecdote with cool analysis of the company’s triumphs and failures, this is an unusual company history and an invaluable record of a Scottish engineering legend.

William Weir (Viscount Weir) was chairman and chief executive of the Weir Group from 1973 to 1980 and chairman again from 1983 to 1999. In a distinguished career, he has held many other directorships and was for many years on the board of the Bank of England.