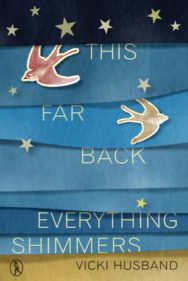 Home > Poetry, Drama, Criticism > Poetry > This Far Back Everything Shimmers

This Far Back Everything Shimmers

The universe has never been depicted so intimately, nor the mundane so infused with stellar significance as it is in the poetry of Vicki Husband. This debut collection is as inspired by quantum physics as it is by domestic drama: the shape of the universe is mimed during a game of charades; a woman’s domestic arrangements take on a cosmic dimension; a man stands on the corner selling black holes and property on the moon. Her nature poetry stands at an odd angle to her subjects, not merely content to observe or eulogise landscape or animals: she wants to know what police horses patrolling Glasgow’s Sauchiehall Street on Saturday night make of the drunken revellers or why jellyfish are flashmobbing a nuclear power station. Her imagination is rooted in compassion, particularly for the elderly and, in one especially moving piece, a man slowly dying from asbestosis. With sympathy, humour and an idiosyncratic eye, Husband reveals herself to be a unique and cherishable talent.

Reviews of This Far Back Everything Shimmers

"This impressive first collection is imbued with a thirst for knowledge and a need to explore, and make sense of, the world around us and our place within it. To do this it offers time and again memorable vignettes as evidence: the tentative first steps in a relationship; the small every day declines of an ageing parent; footprints of our first ancestors; buying black holes; and the beginning of universe itself. Ultimately this poetic journey full of surprising twists and turns leaves you more alive to the possibilities and connections that surround us each day." – Jim Carruth, Glasgow Poet Laureate

Vicki Husband completed a first degree in Fine Art and trained as an Occupational Therapist. She works for the NHS. In 2010, she graduated from Glasgow University with an MLitt in Creative Writing. She gained a place on the celebrated Clydebuilt poetry apprenticeship scheme in 2012, where she was mentored by the late Alexander Hutchison. She has had poems published in Mslexia, The Rialto, Gutter, Magma, Slate and Northwords Now. Her poetry has won awards in the Mslexia Poetry Competition and the Edwin Morgan International Poetry Prize, while she was a runner-up in the Pighog / Poetry School pamphlet award in 2013.