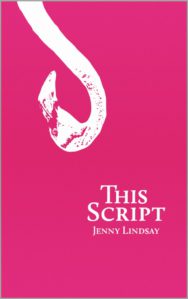 Jenny Lindsay is one of Scotland’s most lauded spoken-word poets. This Script is her most thematically ambitious and poetically playful work to date.

The collection invites us to question the schisms in our ‘isms’, the relationship between the individual and the collective, and ageing in our gendered world. It asks if it is possible to rewrite our scripts on our own. With Jenny Lindsay’s trademark wit and lyrical deftness, This Script is a delving into complex and turbulent contemporary waters, with an ultimate striving for solidarity, empathy, love.

Jenny Lindsay is one of Scotland’s best-known spoken-word performers, and her spoken word, theatre and music organisation, Flint and Pitch (est. 2016), was included in The List Magazine’s Hot 100 for 2017. As an independent programmer and promoter of poetry, live literature and spoken word, Jenny has been credited with contributing to a thriving live poetry scene in Scotland. As one half of cult literary-cabaret duo Rally & Broad (2012–16), she was described as “one of Scotland’s finest cultural innovators.” (Gutter Magazine, 2015). In December 2017 she was awarded the Creative Edinburgh Award for Leadership for her work in the spoken-word sector. Jenny has performed across the UK and further afield at a variety of festivals and events including Latitude, the Edinburgh International Book Festival, the ‘Where I’m Calling From’ Literary Festival in Montenegro, and the Ubud Writers and Readers Festival in Bali. She is the author of one full collection and two pamphlet collections of poetry, was the BBC Slam Champion in 2012 and was longlisted for the inaugural Jerwood Compton Poetry Fellowship in 2017. Her debut solo show, Ire & Salt (2015), gained a four-star review from The Scotsman and acclaim from the Orwell Society and her 2018 solo show, This Script and Other Drafts, was described as “one of this year’s most necessary spoken word performances” by The Wee Review and “Defiant, eloquent and inspiring” by the Scotsman.